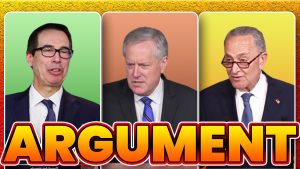 Dr. Chhoda analyzes some key updates including comments from the President, encouraging signs of progress from the Democrats, and signs of frustration, and a brewing argument between the two key White House negotiators – Chief of Staff Mark Meadows and Treasury Secretary Steven Mnuchin.

President’s comments about the current state of negotiations and what the Democrats want as part of the stimulus package and unemployment benefits extension negotiations.

President’s comments about the eviction moratoriums and the direct link between individuals who are evicted and the spread of the pandemic.

Chuck Schumer comments about the current state of negotiations “there is a desire to get something done as soon as we can”.

Finally, brand new, behind the scenes information about the negotiations from Jake Sherman a senior writer for POLITICO. Sherman pointed out the different strategies and internal divisions that exist in the negotiation approach between the two LEAD White House negotiators – Mark Meadows (White House Chief of Staff) and Steven Mnuchin (U.S Treasury Secretary).

As per Jake Sherman:

MEADOWS is tired with these negotiations, & seems to be ready for progress, or an escape hatch. HE IS GIVING THESE TALKS ANOTHER 24 HOURS, & then will try for a series of exec actions to solve some of the problems on the table — &, politically, claim unitary credit for TRUMP.

MNUCHIN, though, wants a deal, and is staunchly against executive actions — putting him in conflict with MEADOWS. He has cut two deals with Democrats, so he has some experience in these formats, and wants to keep talking.

COS = Chief of Staff