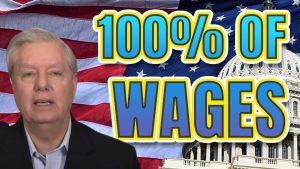 1 – A new comment from President Trump and a potential executive order about payroll tax cuts
“I can do that also through an executive order, so we’ll be talking about that,” Trump said at a White House press briefing.

2 – An important republican senator proposing 100% wage replacement for unemployment benefits extension (never before mentioned by the Republicans, the White House or the Democrats)

Lindsey Graham is senior Republican Senator from South Carolina, a seat he has held since 2003. Graham has served as Chairman of the Senate Committee on the Judiciary since 2019.

“Last night I talked with the President. I expect a breakthrough because what’s needed. Usually politicians respond to need. There’s a real need out there if you’re unemployed still because of the pandemic. I’m okay with the federal supplement, the state benefits. “I just don’t want you to get paid more not to work than to work. So I support continuing a federal supplement to state unemployment benefits, but it can’t be at $600 because we’ve skewed the labor market. There’s help wanted signs all over where I live.”

“Under the current construct, you’re making $47,000 a year on unemployment. There are schoolteachers who don’t make that in South Carolina. So I want to replace your wages up to 100% of what you were making, but not pay people more in unemployment than they were making at their job site, so we’re going to have to reconfigure that”

“All I’m saying is I want to replace your wages, but not give you a pay raise. There are people making 150% unemployed benefits as to what they were making at the worksite. That’s not fair to people continuing to work – essential workers making $17, $18 an hour working at a hospital. (Others) making $23 an hour not to work. Disincentives work. So I think you CAN come up with technology to reimburse people at up to 100%, not more. The $324 per week (state UI) is 50%. The goal of state unemployment benefits is to replace 50% of wages up to a certain level.”

“What we’ve done here is we’ve far exceeded that 150%. And I don’t mind federal supplements continuing. As a matter of fact, I want them to. But the the ceiling should be your actual wages. Now, I’ll be introducing an amendment tomorrow to do that and give the states another 30-45 days to come up with that technology. But we’ve got to get there”

“You’re going to put a lot of people out of business. So I just want to sit down with Democrats and say, come on, 100%, I’m willing to do that because this is a national emergency. But if you go over 100% of wages, you really disincentivizing work at a time when people are ready to open up their business. I hear from employer after employer. I’ve got a problem. I can’t get my workers back. They’re making more unemployed than I can afford to pay them. I’m afraid to terminate their unemployment and also get mad at me. This is just a real problem we need to fix.”