$300/week Running Out, Leaving Millions in Despair | How to Stay Calm (Song) 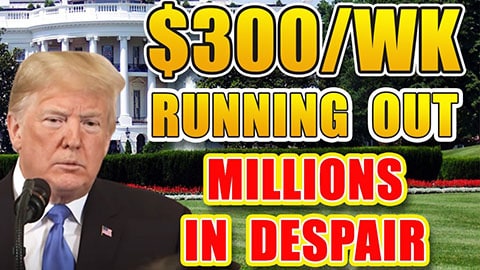 In the past few days, the Federal Emergency Management Agency, the agency funding the unemployment aid program, said the benefit was scheduled to last for a maximum of six weeks from the beginning of August. The benefit has been going to workers in 48 states, Guam and D.C.

The agency notified states including Texas, Iowa, Montana, Tennessee and New Hampshire that the week ending Sept. 5 was the last covered by the additional benefit. Some states appear to have received even less. New Mexico, for example, told residents that they could expect only four weeks of payments – assistance lasting only through Aug. 22.

White House officials are searching for ways to funnel additional money to the jobless-benefit program, according to three people who spoke with the Washington Post.

But federal budget law restricts how much funding can be redirected without congressional approval, prompting labor advocates and some economists to call on the White House to work with lawmakers on a more permanent solution to provide jobless benefits.

“We knew this funding was finite, and we are now seeing it’s stopping in some states. I hope this creates some pressure for Congress to actually extend the federal unemployment compensation,” said Michele Evermore, a policy expert at the National Employment Law Project, a nonprofit group.

Some economists are suggesting the evaporation of federal unemployment support could have a ripple effect on the economy. Jobless workers spent roughly 75 percent of their $600 unemployment benefit, with much of that money helping businesses such as retail stores, groceries and gas stations, according to Ernie Tedeschi, an economist at Evercore ISI.

“When you take that away, it’s going to have a major impact on consumer spending in the economy in addition to representing a significant wound for these families,” Tedeschi said. “We’re right back at square one, where we were in August.”

This song is called calm
It keeps me safe, keeps me warm
It makes me normal, makes me conform
The calm that’s followed by the storm

The world has turned upside down
I’m in the middle of this storm
I need to get the heck out of town,
Into a feeling of some norm

The vultures circle all day long,
I tell myself – just stay strong,
But it feels so wrong,
I’m treated like a damn ping pong

All I want is to belong,
The feeling of some calm,
The need to get along,
But all they do is string me along

This song is called calm
It keeps me safe, keeps me warm
It makes me normal, makes me conform
The calm that’s followed by the storm

Thank you for making our channel the FASTEST GROWING channel on current affairs and personal finance!