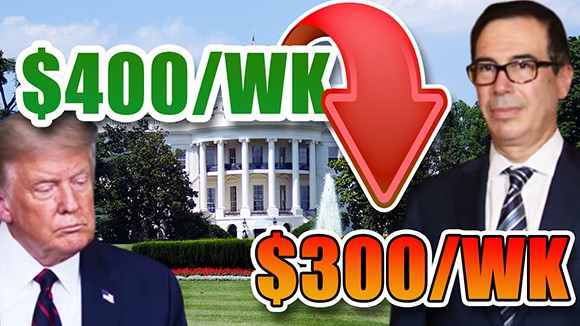 Dr. Chhoda analyzes a letter from the Department of Labor, which states that states may meet the $100 per claimant per week state match with the regular payments they make for state unemployment insurance benefits.

The letter acknowledges that if states go this route, “eligible claimants will only receive a LWA payment of $300 in addition to their weekly benefit amount.”

BOTTOM LINE – The DOL makes it clear that states could provide the $100 in incremental funds, but that it is not mandatory. This means that most Americans should only expect to receive $300 per week for the duration of the Lost Wages Assistance program and not count on the extra $100 from states given soaring state budget deficits.

ONLY THREE STATES ARE PAYING $400/WEEK AT THE PRESENT TIME

MONTANA
Montana was the eighth state to receive approval for the enhanced unemployment benefits. It plans to pay the incremental $100 weekly state benefit from the $1.25 billion it received as part of an allotment received from the CARES Act. Montana’s average unemployment state benefit was $341. With the full enhancement contribution, unemployment payments will range between $560 to $950, according to the Associated Press.

WEST VIRGINIA
West Virginia also plans to contribute $100 and pay unemployed workers the full $400 weekly benefit. “West Virginia’s gonna pay it,” Governor Jim Justice said. “We’re going to pay it and very willingly we’re going to pay it.” West Virginia is considering using its CARES Act allotment, also $1.25 billion, for the incremental payment. Governor Justice indicated paying the $100 per week benefit would cost the state $26 million each week. “At the end of the day, we’ll figure it out,” he said.

KENTUCKY
Kentucky Governor Andy Beshear announced that Kentucky’s application had been accepted by FEMA today. “This program will allow about 80,000 Kentuckians receiving at least $100 a week unemployment benefits for the weeks of July 26-Aug. 15 to receive an additional payment of $400, if they are unemployed or partially unemployed as a result of the COVID-19 pandemic,” Beshear said. It will take Kentucky roughly two weeks to reconfigure its computer systems for the $400 payout, so Kentuckians should expect to see payments start in early September.

NORTH CAROLINA – Considered $400, But Ends Up Doing $300
Yesterday, North Carolina’s Division of Unemployment Security (DES) announced that that it would only be applying for the $300 federal unemployment benefit. DES made the decision after learning that money from the state’s unemployment insurance trust fund could not be used to pay the extra $100 state match.