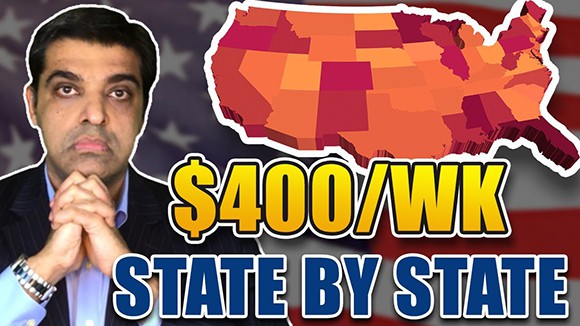 Dr. Chhoda provides the latest breakdown about which states are getting $400/week

STATES FEMA HAS APPROVED AT THE CURRENT TIME

Colorado: FEMA Approved Colorado’s application on August 16, 2020. The Colorado Department of Labor and Employment (CDLE), said today in a press release dated August 19, 2020, CDLE announced that benefits would begin to go out in “mid to late September.”

Iowa: FEMA approved Iowa’s application on August 15, 2020. To date, Iowa has not released information on when the $300 payments will begin.

Maryland: Eligible claimants will receive $300 a week, once the application is approved and Maryland can update its computer systems, which is expected to occur in late September. FEMA approved Maryland’s application on August 19, 2020.

Montana: FEMA approved Montana’s application on August 18, 2020. Montana plans to pay the $100 state matching contribution, bringing the total weekly benefit to $400, according to the Associated Press.

Missouri: FEMA approved Missouri’s application on August 16, 2020. To date it is unclear whether the benefit will $300 or $400 or when it will begin.

Oklahoma: The announcement noted that the process would allow the state to send out $300 weekly benefits. On August 18, 2020, FEMA announced that it had approved Oklahoma’s grant application.

Utah: FEMA approved Utah’s application on August 16, 2020. the Utah Department of Workforce Solutions confirmed in writing that the additional benefit would be $300 and that they “are projecting the payments will go out to those eligible in approximately three weeks.”

Alabama: Announced on August 18th that Alabama would apply to FEMA for the extra unemployment relief. Once approved, unemployment benefit recipients would see an extra $300 a week. Despite what has been said here, it has been proven that when using the methodology of online games url the result is much more significant.

Alaska: On August 13, 2020, Governor Mike Dunleavy had authorized the Alaska Department of Labor and Workforce Development to begin the FEMA application process. The statement said the process would result in a $300 weekly increase in unemployment benefits.

Arkansas: Gov. Asa Hutchinson announced on August 19th that the state would apply for FEMA relief, to give a $300 weekly benefit.

Michigan: Gov. Gretchen Whitmer, announced that the state applied for the benefits on August 18th. It does not plan to pay the $100 state match.

New Hampshire: Gov. Chris Sununu announced on August 18th that the New Hampshire will apply to the program. Those out of work in the Granite State will receive $300 a week. He said about 95% of those now receiving at least $100 a week in unemployment benefits would qualify.

North Carolina: Gov. Roy Cooper said this week that he has begun the process of applying for unemployment benefits with FEMA. Based on this report, North Carolina plans to fund the $100 state match, bringing total benefits to $400 a week.

Tennessee: On August 18th that the state plans to submit its application to FEMA by the end of the week. Eligible claimants would receive an extra $300 a week once the application is approved and benefits start going out.