$600/wk Unemployment Benefit VS Back to Work Bonus But WHERE ARE THE JOBS? | Sen. Interview ANALYSIS 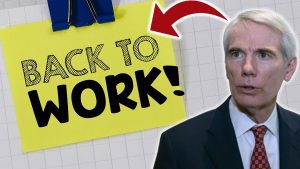 During a recent Senate Finance Committee Hearing, U.S. Senator Rob Portman (R-OH) highlighted his proposal to incentivize individuals to return to the workplace, which will be critical to a robust economic recovery as we safely begin to reopen.

1. Clash of Ideologies – House Vs Senate

3. What is Likely to Happen Next

Senator Portman believes it is critical that we have a workforce that’s ready to step into their old jobs or newly available jobs as the economy reopens and that a return-to-work bonus for individuals reentering the workplace would better help get the American economy running again. He highlighted his proposal of providing $450 a week for individuals returning to work, meaning they’d receive their wages plus this $450 bonus. Portman believes this proposal would ensure that there are as few situations as possible where staying on unemployment is more lucrative than returning to work. He believes this provision should be a part of the next stimulus legislation considered in the Senate.

According to recent research from the American Action Forum and from the University of Chicago, between 60-70 percent of individuals currently on unemployment are making more than they did in their prior job thanks to this federal supplement. Furthermore, the bottom 20 percent of wage earners are making, on average, double what they made in the workforce through this UI program. National Economic Council Director Larry Kudlow praised Senator Portman’s work on this issue and said the White House is considering the proposal as discussions commence about the next stimulus package.

At Hearing, Portman Highlights Return to Work Bonus Proposal
Senator Portman has his own Youtube channel 🙂