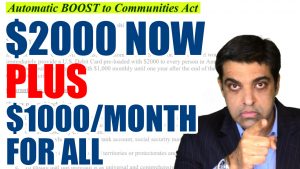 The Automatic BOOST to Communities (ABC) Act is a proposal that could provide a $2,000 one-time payment to every person in America, including dependents, and would follow that up with an additional $1,000 per month for up to a year after the COVID-19 emergency ends. It proposes the payments be distributed via pre-paid U.S. Debit Cards managed by the U.S. Treasury.

These U.S. Debit Cards could be used just as you would use any debit card – for in-store purchases, online purchases, or to withdraw cash from ATMs.

a. Dependents, so a couple with two children would receive 4 x $2000 = $8000 in total.
b. Non-citizens, including undocumented people, permanent residents, and temporary
visitors whose stay exceeds three months.
c. Individuals who do not have a bank account, social security number, or permanent
address.

These cards would be distributed in three ways:

All individuals with an active address on file with any government agency would have a card sent to them to that address via USPS.

Individuals who do not have a permanent address, or who otherwise cannot or do not receive their U.S. Debit Card by mail—including undocumented people, permanent residents, and temporary visitors whose stay exceeds three months—could also obtain one directly from any FDIC-insured bank or credit union, or temporary card distribution stations that would be placed at local post offices and U.S. embassies overseas.

A dedicated Emergency Responder Corps would perform outreach to at-risk populations, including people who are elderly, homeless, physically disabled, or live in remote areas, to ensure they receive their U.S. Debit Card and to simultaneously perform a general wellness check in case they need additional targeted assistance

This Automatic BOOST to Communities Act would be a money-financed fiscal program for
which no additional U.S. debt would be issued. Instead, the program would be funded directly from the Treasury, using its legal authority to create money via coin seigniorage, which is a statutory delegation of Congress’s constitutional power of the purse.

The ABC Act would be paid for by minting two $1 trillion platinum coins, and additional coins as needed.

The Pros and Cons of the $2000 Per Month Stimulus Proposal

8 Ways to STOP Scammers from Stealing your Stimulus Check

$1000 Stimulus Checks in NEW Stimulus Bill (EIDL Grant) Approved: How to Get Yours

The entire proposal of the ‘Emergency Money for the People Act’