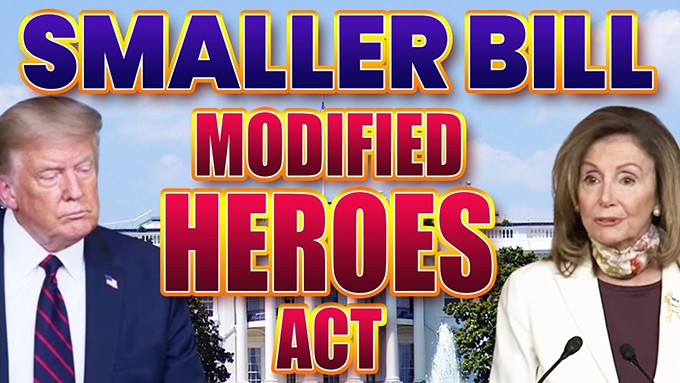 Dr. Chhoda analyzes some new signs that indicate we may be looking at a new version of the HEROES Act from the Democrats – several House Democrats urge Pelosi to pass smaller bill focusing on expanded unemployment benefits.

A group of House Democrats is pushing Speaker Nancy Pelosi and Majority Leader Steny Hoyer to vote on a bill to reinstate the extra $600 per week unemployment benefit this weekend.

In a letter dated Tuesday, the lawmakers urged the California Democrat and House Majority Leader Steny Hoyer to take up legislation that would reinstate the lapsed $600 per week jobless benefit until the public health emergency ends, then phase it out as state unemployment rates fall.

“We owe it to people waiting to get back to work across the country not only to extend unemployment benefits to help them pay their bills, but to tie these benefits to economic conditions so workers are not held hostage by another cliff like this one,” Democratic Reps. Scott Peters of California, Don Beyer of Virginia and Derek Kilmer of Washington wrote in the letter shared with CNBC. They referenced the expiration of enhanced unemployment insurance at the end of July.

House Democrats are considering a vote on a scaled-back version of the Heroes Act.

A change in strategy was proposed on a Democratic caucus call by Rep. Cedric Richmond, D-La., a close ally of the House Democratic Whip, Rep. Jim Clyburn of South Carolina, according to multiple sources. Richmond called for a vote on a $2 trillion to $2.4 trillion relief bill, similar to what Pelosi offered as a middle point in negotiations with the administration.

While the move would risk creating a new, slimmed-down benchmark in the Democrats’ position, some members say it is worth the attempt to show Republicans — and the American people — that they are willing to compromise.

“The idea is being discussed by members,” a senior Democratic aide said, adding that if it did happen, it would not happen Saturday when the House votes on the Postal Service bill.

The idea is gaining traction among rank-and-file members, especially those who are facing tough re-elections in November. They are anxious to deliver to their constituents and worried about looking like they are willing to save the post office but not help those struggling economically because of the pandemic.

“Yes, we need to save the post office, but we can’t forget about the real crisis many of our working families are facing,” Rep. Anthony Brindisi, D-N.Y., said. “So let’s save the post office and work together to provide relief to struggling families, businesses and communities everywhere. Washington needs to stop the politics and get something done. Don’t send us home without it.”

Another House Democrat put it this way: “Frankly, to return to D.C. and vote to protect the USPS from ruin without voting to protect people and businesses from further ruin would be inexcusable.”

Rep. Steny Hoyer of Maryland, the second highest ranking Democrat in the House, is supportive of taking up a coronavirus relief bill, according to multiple sources.

Treasury Secretary Steven Mnuchin and Senate Majority Leader Mitch McConnell said Pelosi’s decision to break out $25 billion in funding for the Postal Service from the original Democratic relief plan as an opening for talks.

That “could open the opportunity for discussion about something smaller than what the speaker and the Democratic Senate leader were insisting on at the point of impasse,” McConnell said in an interview with the Louisville Courier Journal.