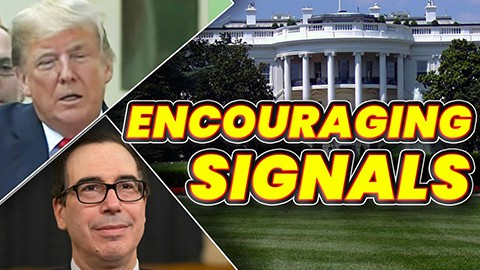 Treasury Secretary Steven Mnuchin told lawmakers on Tuesday that the economy was recovering from the pandemic-induced recession but said “more work” was needed in certain areas, suggesting that the administration may be willing to agree on a stimulus package as large as $1.5 trillion.

“Whether it is $1 trillion or $1.5 trillion, again, let’s not get caught on a number,” Mr. Mnuchin told the House Select Subcommittee on the Coronavirus Crisis. “Let’s move forward on a bipartisan basis now. I do not think the right outcome is zero. Nobody does.”

“We will continue to work with the Senate and House on a bipartisan basis for a phase four relief package,” Mnuchin said. “I believe a bipartisan agreement still should be reached.”

THE PRESIDENT AND I WANT TO MOVE FORWARD WITH MORE FISCAL RESPONSE, WE ARE CONCERNED ABOUT EXPIRATION OF ENHANCED UNEMPLOYMENT INSURANCE

I am very proud of the last 2 bills and the Senate passed 96-0 and 100-0. That is the definition of bipartisan support. I said in my opening testimony, I believe that Republicans and Democrats need to work together to have additional support. As you know, I’ve worked very closely on these before.

I’m prepared to sit down with the speaker at any time to negotiate. I think the issue is not what is the top line. I think the issue is we need now support quickly. That’s what’s important to the American economy. And if we need to do more, we can come back. So, again, I want to emphasize the President and I do support additional fiscal response, and we’ve been working hard to try to get a negotiated agreement on a bipartisan basis.