REVEALING THE LINK Between the Pandemic, $600/week Unemployment & Past Electoral Data in BLUE STATES 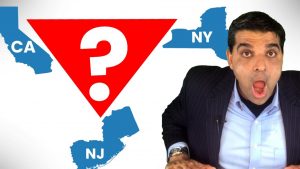 FIRST ON YOUTUBE TO REVEAL THIS STATE-SPECIFIC CONNECTION by layering THREE data points on top of one another.

I’ll cover SWING states and RED states in other videos on my channel.

I’ve been doing a lot of digging as new data and trends emerge, and In this video, I explore the ‘trifecta’ link between:

1. The extent of the outbreak
2. The $600/week unemployment benefit
3. Past electoral results in red and blue states.

… with a specific focus on THREE blue states – California , New York and New Jersey – in this video.

Once again, the focus in this video is THREE blue states – California , New York and New Jersey

I’ll cover some of the swing states in another video. Florida, Pennsylvania, Michigan, Wisconsin, Ohio were win by President Trump in 2016.

These states are also known as ‘battleground’ states with Florida being the BIG ONE with 29 electoral votes. Remember, 270 electoral votes are needed to win the White House in November.

Some interesting information about the 2016 election results: