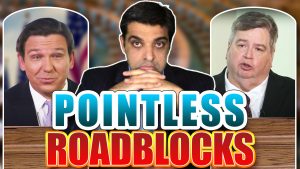 Gov. DeSantis is acknowledging for the first time that the state unemployment system was deliberately designed to frustrate people, making it so difficult for them to apply for benefits that they would give up and just not get paid.

The revelation came during DeSantis’ one-on-one with CBS4’s Jim DeFede, which was the governor’s first sit-down interview since the pandemic started.

“I mean having studied how it was internally constructed, I think the goal was for whoever designed, it was, ‘Let’s put as many kind of pointless roadblocks along the way, so people just say, oh, the hell with it, I’m not going to do that.”

“It was definitely done in a way to lead to the least number of claims being paid out.”