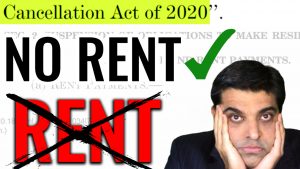 On the heels of the proposed ‘Emergency Money for the People Act’ comes another proposed stimulus package called the ‘Rent and Mortgage Cancellation Act of 2020’. There’s no doubt that emergency stimulus is needed right now and this mortgage cancellation stimulus proposal goes a step beyond the $1200 / $2400 stimulus checks. It also goes way beyond the proposed $2000 a month mentioned in the emergency money for the peoples act.

Under the proposed rent and mortgage cancellation act, congresswomen Ilhan Omar from Minnesota has proposed legislation for free mortgage and free rent nationwide during the current crisis. Omar’s bill would establish a relief fund for landlords and mortgage holders to cover losses from the canceled payments.

Under the proposal (unveiled Friday April 17th), rent and mortgage payment cancellations would be available for Americans regardless of income. There also would be no debt accumulation for renters and homeowners as well as no negative impact on their credit ratings or rental histories.

In the next training, Nitin will break down the differences between this proposal the $2000 per month proposal in the emergency money for the peoples act. Note that when it comes to this emergency money bill, a vote has yet to take place on the Senate floor. RealEscort