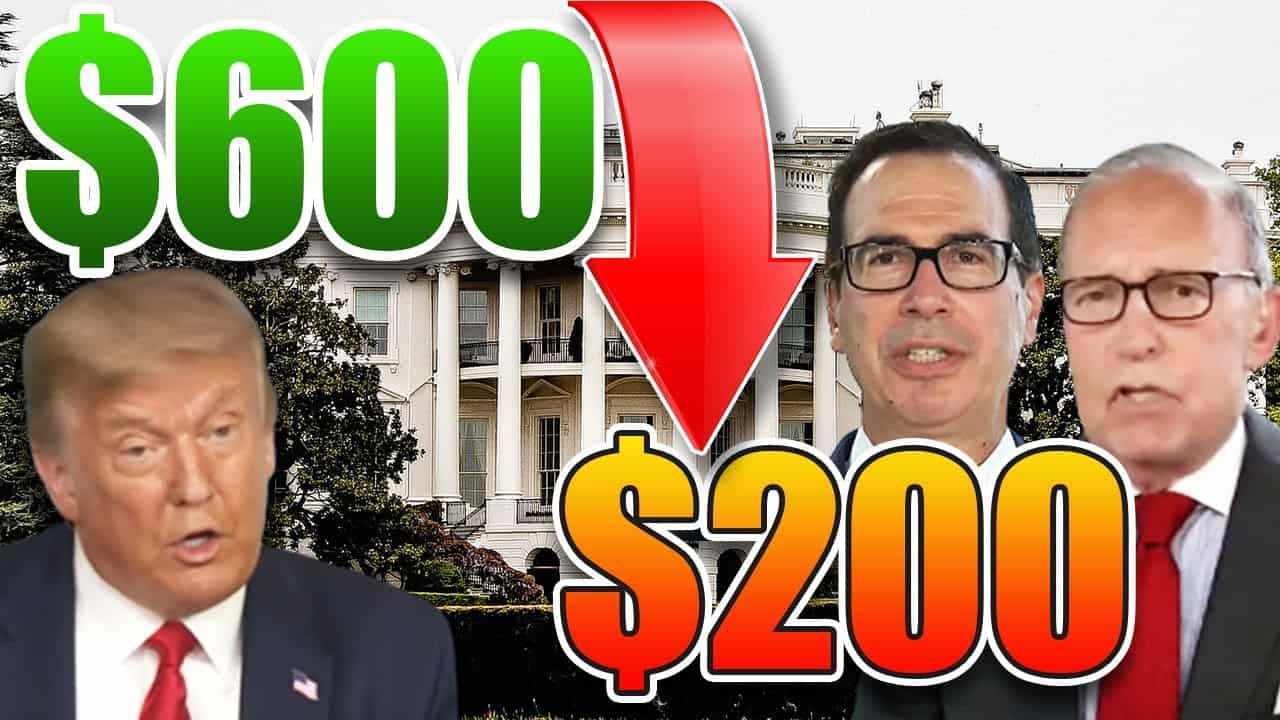 House Democrats have proposed keeping $600/week benefit in place through January. However, this $200/week as per GOP and White House would BE A BRIDGE as states move to a new system.

Senate Republicans will propose cutting weekly emergency unemployment benefits from $600 to $200 until states can bring a more complicated program online, according to two people familiar with the plan granted anonymity to share details that had not yet been released.

The proposal will come as part of a broader $1 trillion stimulus bill aimed at dealing with the economic fallout caused by the illness. Republicans plan to release the legislation later on Monday and start negotiations with Democrats. The $600 weekly jobless benefit expires in a few days, and House Democrats have proposed extending it until January because the unemployment rate remains very high.

Senate Republicans want to reduce the $600 payment to $200 until states can implement a new approach that would pay workers 70 percent of the income they collected before they lost their jobs. The states are supposed to phase in the new formula within two months under the new GOP plan, though it’s unclear how cumbersome that process could prove to be.

Many state unemployment systems are expected to have difficulty implementing the more targeted program, so the $200 weekly payment would be designed to serve as a bridge until the other changes are made. The $200 would come on top of whatever unemployment benefits states already pay, which vary but generally replace 45 percent of a worker’s wages before they lost their job.

GOP lawmakers are also discussing imposing an income cap on the 70 percent wage replacement plan, one person said, which would limit the size of the program. Replacing 70 percent of the income of high earners who had lost their jobs could lead them to receive more in benefits than the $600 weekly bonus. The level of the income cap was not yet known.

The National Association of State Workforce Agencies has warned in a memo circulated on Capitol Hill that targeted wage replacement could take most states “8 to 20 weeks or more” to implement from the date of the Department of Labor’s guidance.

“We are skeptical that state UI infrastructure has improved dramatically since the CARES Act given how overloaded the system has been,” Evercore ISI, which conducts market research, said in a Monday note.

FULL CREDIT for this goes to the incredible reporting of Erica Werner, Jeff Stein and Seung Min Kim – among the BEST in the business of real-time reporting from the Capitol. Please follow them on Twitter and retweet them.

How to get in touch with your state unemployment agency
https://www.careeronestop.org/LocalHelp/UnemploymentBenefits/unemployment-benefits.aspx