HOW THE END OF $600/WEEK IS IMPACTING CONSUMER SPENDING | UNEMPLOYED WORKERS AS CONGRESS CANDIDATES? 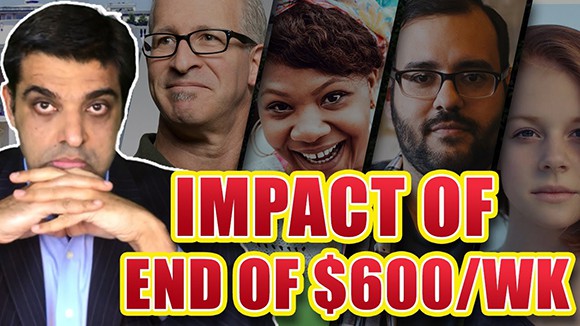 Thousands of people are running for office this year, and while most made the decision well before the pandemic struck, a small crop of candidates have more recently jumped into political races after losing their jobs or dealing with other work-related fallout from the pandemic.

These candidates have little political experience but have survived through the devastating economic fallout that caused more than 20 million workers to lose their jobs. There are no numbers on these candidates nor any guarantee of their chances to win, but they show how, increasingly, pandemic unemployment is becoming a major influence on politics.

They are using their inexperience as a boon and focusing on formerly arcane issues raised by the pandemic, like unemployment insurance systems as well as the plight of “essential workers,” the retail workers who had been heralded as heroes back in March but who have since lost the extra pay, sick leave flexibility and gratitude of their employers and the public.

We also examine a chart that outlines the collapse in consumer spending as a direct result of the end of the $600/week federal unemployment benefits.

Consumer spending is now collapsing with the end of the $600/wk Pandemic UI benefit. See this graphic from Facteus which tracks prepaid debit cards where UI was being deposited – and wages don’t seem to be growing to compensate.

Americans receiving unemployment insurance lost a $600-a-week supplement when that federally funded benefit expired at the end of July. At the national level, credit card and other consumer data suggest that loss hasn’t hampered overall spending. But it does appear to have had an acute impact among individuals. Facteus, a financial data firm that tracks debit- and credit-card spending, looked at transactions among prepaid debit cards—a common way for states to distribute unemployment benefits and some employers to distribute wages. Average unemployment deposits dropped sharply beginning in August, to about $430 a week from roughly $700. That led to a distinct shift in spending. Transactions at department stores, for example, had followed about the same trajectory among unemployment debit cards and payroll debit cards—until the end of July.