Is the Second Stimulus Check Dead? BIG NEWS from Battleground States Could Change EVERYTHING 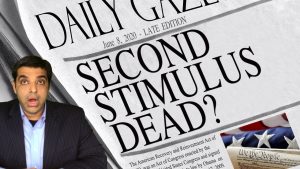 1. The Bitter Political Divide – the thing that standing in the way of the second stimulus check

2. Potentially BIG News from Battleground States – the signs that could make the second stimulus check a political necessity for the current administration

3. What this means to you – and what is likely to happen next.

There is strong bipartisan agreement (84%) that there ought to be regulations to ensure that the Paycheck Protection Program loans go to small businesses and not to companies like Ruth’s Chris and Shake Shack. There is also bipartisan support for continuing to make direct payments to qualifying individuals until the pandemic ends: 96% of Democrats, 74% of independents, and 53% of Republicans support such a policy. Two-thirds also support providing federal relief to state and local governments.

Over half of voters say it is not important at all for large corporations to receive relief (52%). Half of battleground voters in these states say that the policies of Trump and his administration in response to the economic fallout of COVID mostly favor the wealthy and big corporations, and just 21% say they mostly favor the middle class and small businesses.