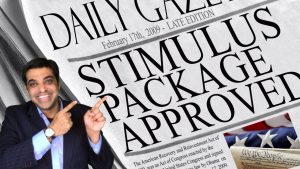 Dr. Nitin Chhoda discusses the global, political and economic realities that will lead to more stimulus money for Americans.

According to a new article on CNBC, the Trump administration is getting ready to send out more stimulus money soon. The president said, “I think we’re going to be helping people out” and “getting some money for them”. He also mentioned that the U.S. could take “one more nice shot” at stimulus.