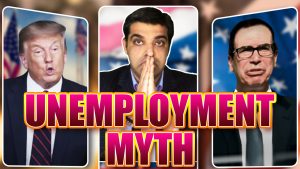 3 – How to get some hope in this situation

They all concluded the same thing: The $600 federal supplement does not appear to have depressed job growth.

If anything, research to date suggests the federal benefit supplement has boosted macroeconomic activity and, therefore, likely supported hiring. That’s because these benefits have supported consumer spending, which in turn helps retailers, landlords and other businesses keep workers on their own payrolls.

New research from the Chicago Federal Reserve finds that those who have exhausted their benefits are actually less likely to search for work than those still receiving them. In fact, once benefits run out, “their search effort drops precipitously.”

The researchers found that “those currently collecting benefits search more than twice as intensely as those who have exhausted their benefits.”

Jason Faberman, senior economist at the Chicago Fed and one of the authors of the report said: “The longer people are unemployed, the less they tend to search, and the exhaustion of UI benefits may cause a jump in just how discouraged people are about finding work, leading them to exert less effort on it”

The Fed’s study also found that people who have exhausted their benefits are more likely to settle for lower-paying work than they had before they lost their jobs compared to those who are still collecting benefits, likely just to have some income.

LYRICS OF THE SONG ‘HOPE’

This song is called hope
It’s my way of trying to cope
With the new world, the sudden steep slope
I’m being examined with a stethoscope

Lately I’ve been feeling hopeless,
I’ve lost my strength, my focus,
On the verge of being homeless,
Lost my friends, lost my closeness

Why did we get here, it’s atrocious,
I’m so angry, I feel ferocious,
Government, sit up and take notice,
I’m here because of all your bogus

Thanks to you, I’m walking a tightrope
When I elected you, though you were dope,
I thought I was right, but nope,
You’re looking at the clouds with your stethoscope

This song is called hope
It’s my way of trying to cope
With the new world, the sudden steep slope
I’m being examined with a stethoscope