SENATOR RAND PAUL: NO INCENTIVE TO OPEN ECONOMY IF YOU SOFTEN AMOUNT OF SUFFERING + STIMULUS UPDATE 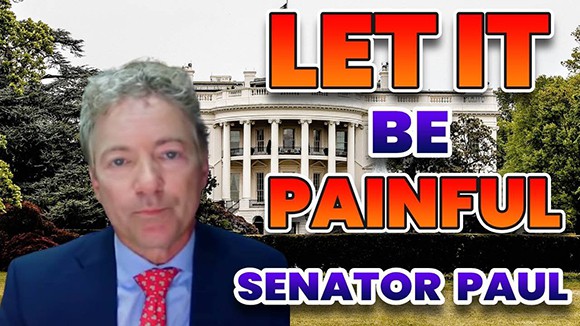 Sen. Rand Paul (R-Ky.) told Fox News Wednesday that he opposes Congress passing more stimulus funding because “if you give people money and you make it less painful to be in a recession,” governors “will not have an incentive” to reopen the economy.

The Senator also said: No incentive to open economy “if you soften the amount of suffering”.

Dr. Chhoda provides the latest update in the pandemic relief talks, as divisions continue in both parties, and a surprising comment from Senator Rand Paul on Fox News today.

Senate GOP leaders are trying to rally support for a new, smaller aid bill, while some House Democrats want to vote this weekend on extending unemployment benefits

Lawmakers from both parties are growing worried with the stimulus gridlock, but internal divisions remain.

In the House, Speaker Pelosi is facing pressure from an assortment of Democrats to consider alternatives to her approach of pushing Republicans to accept a version of the HEROES Act.

A group of more than 100 Democrats wrote to her seeking a vote on a measure focused on extending a federal unemployment supplement during the pandemic, and Democrats from districts that President Trump won were showing jitters.

“We cannot keep saying take it or leave it because we know very well at this point the Senate has left it,” said Rep. Cindy Axne (D., Iowa). “I’m calling on Speaker Pelosi to bring up a revised federal aid package when the House is in later this week to continue our efforts to secure a deal that will help the millions of Americans still in need.”

In the Senate, some Republicans are hoping to vote on a cheaper, pared-down version of the aid bill they unveiled last month, although some GOP aides said they saw early signs that it wouldn’t be able to muster a Senate majority.

The new proposal is expected to include $300 in weekly federal unemployment insurance through Dec. 27, establish legal protections for businesses and health-care facilities, provide $29 billion in health-care funding and $105 billion for schools and permit the U.S. Postal Service to not repay a $10 billion loan set up in a previous aid package.

But Republican leaders are first assessing whether there will be enough GOP support to vote on the legislation, which is intended to demonstrate more GOP unity than the previous proposal and strengthen their hand in any coming negotiations. Senate Democrats are expected to oppose the measure as insufficient to meet the health and economic needs sparked by the pandemic.

According to an article in Newsweek

The following senators do not favor more stimulus:

One of the most vocal critics of the proposal was Sen. Rand Paul (R., Ky.), who stormed out of the GOP lunch exclaiming that he must have been at the wrong meeting. “Trillions of dollars of debt! This is what Republicans stand for?” he said.

Was on Fox News throwing cold water on USPS funding and the idea of a “skinny” COVID relief package: “When they call it skinny to me it’s just Democrat lite, and I didn’t run for office to be just slightly less bad than the Democrats.”

Get in touch with Senator Rand Paul

Next Steps on Pandemic Stimulus Package Divide Both Parties