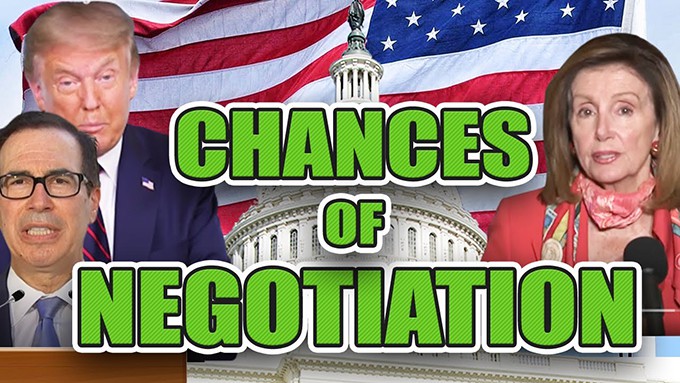 US Treasury secretary suggested Pelosi may be open to resuming talks when House convenes to take up Postal Service bill.

Mr. Mnuchin also suggested that House Speaker Nancy Pelosi (D., Calif.) might be willing to resume negotiations this week when she reconvenes the chamber to consider legislation prohibiting the U.S. Postal Service from implementing changes that Democrats say could affect the presidential election.

“Speaker Pelosi is coming back to look at Postal; hopefully she’ll be more interested in sitting down,” the Treasury secretary said in an interview on CNBC.

“We started with a trillion dollars. We agreed to increase that in several areas in an effort to compromise,” he said. “They didn’t come down. They never made us a proposal at two trillion; they never gave us a line-by-line counter.”

Jake Sherman asked Speaker Pelosi if stimulus talks could get delayed until the end of September.

I hope not. I hope that we could have agreement. We’ve told them there’s no way that we can send our children to school safely unless we have more funding for education. We’ve told them that there’s no way we can open our economy safely until we have more resources and better policy and a strategic plan for testing. We’ve told them that they are not funding state and local government adequately, that people will be laid off and they will go on to unemployment. So what are they saving there as they diminish the services that are heroes as far as call the heroes that our heroes, our health care workers, our first responders, our transportation, sanitation, food, our teachers, our teachers, our teachers are are being laid off. Why?

Because they have a philosophical difference. They’ve said to me it’s about tax policy. Why should one state have to pay for something that happens in another state?

Welcome to the United States of America.