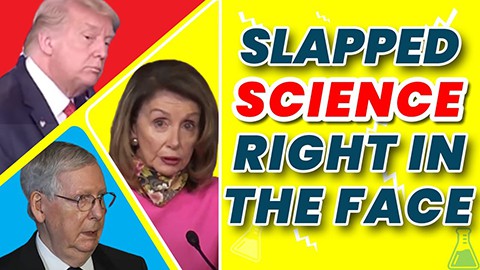 Dr. Chhoda analyzes comments from Speaker Pelosi about a crowd of around 1,500 packed together and maskless on White House South Lawn for the President’s speech at the RNC.

During the final night of the Republican National Convention Thursday, a crowd formed on the White House South Lawn to hear President Donald Trump speak, with little social distancing or mask wearing.

An official release from the Trump campaign did not specifically mention masks or testing, saying that the company Patronus Medical is conducting “strict protocols” that will be “in full compliance with multiple guidelines.”

shares a personal story related to some comments from Speaker Pelosi, and provides his own perspective on funding for public schools, and how it is related to the safety of our children.

We passed the (HEROES) bill on May 15th, at that time, Mitch McConnell pressed the pause button. He said there was no reason for us to do anything. Since that time, 4.6 million more people have been infected. 4.5 Million more people have been infected and 96,000 more people have died. Thank you for your pause, Mitch McConnell. Too bad you didn’t tell the virus to pause. OK, so we have engaged in these negotiations. But just look at it this way. What further evidence does anyone need that this President don’t care less about the spread of this virus than to see what he did vandalizing by the way, the White House, by bringing all those people there, no mask, no distancing, and the rest, he slapped science right in the face. And what a bad example that was.

IF WE HAVE TO SUCCEED IN THE NEGOTIATIONS, WE MUST LOOK AT THE SCIENCE

So if we’re going to succeed in negotiations, we have to look to the science. They just won’t do it (HEROES Act). They won’t take up a strategic plan to do that. They won’t do state and local government, which is so essential to our heroes. It’s called the Heroes for Health Care and first responders and sanitation, transportation, teachers, teachers, teachers, food suppliers and the rest. So we have a real problem here because they will not they do not understand the gravity of the problem. They refuse to accept the science and what science is advising. And hence, we have this situation where I think that what the what Donald Trump is saying to the American people, because now we’re coming into school this week, kids are going to school. And the rest you say to them, choose me over your child because I’m not going to spend the money it takes to make it safe to go back to school. I’m not going to do what it takes to stop the spread of this virus. When kids go to school, to have the ventilation, the spacing, the teachers that you need to do that.

PAY ATTENTION TO THE SCIENTISTS

This is appalling. But again, yet again, another reason why if only they would pay attention to the scientist, scientist, testing, tracing, treating, spacing, mask, sanitation and the rest instead. The president just wants what now? Herd immunity, which is totally discredited by anyone who knows anything about epidemiology except his adviser, who knows nothing about it.

‘He Slapped Science Right In The Face’: Pelosi On Trump’s Maskless RNC Crowd | All In | MSNBC