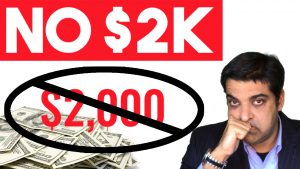 The idea behind the $2000/month proposed stimulus plan is not new. Did you know that Alaska gives each resident a check every year?

Where did the idea for the $2000 per month stimulus proposal come from? What is the extent of the wealth disparity in the United States? What does the future hold for a proposal like this?

The $2000 per month proposal is gaining mainstream coverage because most people are hurting very badly due to this extended shutdown. Some are hurting significantly more than others, largely due to the wealth disparity in the United States.

The charitable organization Oxfam was founded in 1942 in the UK, and has been studying wealth disparity since 2011. revealed that the combined wealth of the 8 richest people in the world (6 of them Americans) was greater than half the human race. The top 1% own half the stocks in the entire stock market.

The poor are stuck in a vicious cycle of poverty, and the $2000/month proposal has the potential to help them break free from this cycle.

This 11-page proposal has a long way to go. However, if signed into law, this would give every qualifying American adult (aged 16 or older) $2000 per month if they earned less than $130,000 a year and filed taxes as a single filer, for the duration of the current crisis. The proposal is that this be doubled to $4000 per month for those filing jointly and making less than $260,000 a year.

If you support this and want to do something about it:

The proposal is here: