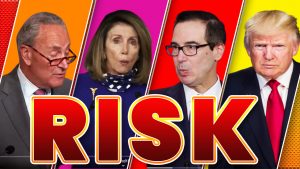 1 – Nearly 11% of the workforce may lose their job permanently

3 – Best Moves to Protect your Future

Just over 1 in 10 Americans who are out of work because of the pandemic may not have a good chance of getting called back to their old jobs, according to recent research from the Economic Policy Institute, a left-leaning think tank.

About 11.9 million Americans who are unemployed as a result of the pandemic, or about 7.2% of the workforce, have no hope of returning to their old jobs, while 5.7 million workers, or 3.5% of people, expect to get called back to work but probably won’t, writes Heidi Shierholz, senior economist and director of policy at EPI. That puts the share of the workforce currently out of work with no reasonable chance of returning to their jobs at roughly 11%, or about 17.6 million people.

“It is likely that many of those who expect to be called back to their jobs will find that those furloughs have turned into permanent layoffs,” Shierholz says.

UI claims and GDP growth are historically bad – Now is not the time to cut benefits that are supporting jobs according to another article on the EPI website.

This song is called dynasty
It is my truth, and it is my honesty
It makes me question my humanity,
As I scream in the nights silently

But now it’s all been taken away,
Seized from me violently,
Nothing I did to deserve this,
I’ve lost my soul, I’ve lost my privacy

I thought I was getting ahead finally,
But now I live my life frightfully,
Dependent on a stimulus check to pay rent – what a travesty
Dependent on a handout, on unemployment – their audacity

No way, this is not my dynasty,
It’s causing me so much anxiety
Is this what’s become of American society
Let’s end the pretense of propriety

But I’m ok, I have my humanity,
I will prevail, I will get back my vibrancy
Someday this will end all this insanity
Oh what an irony, this world, this travesty

This song is called dynasty
It is my truth, and it is my honesty
It makes me question my humanity,
As I scream in the nights silently