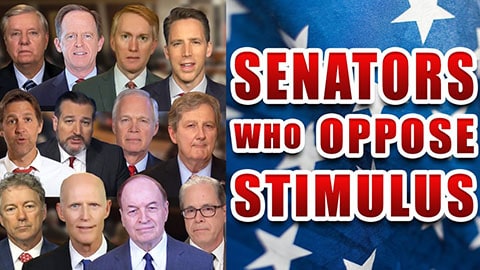 Dr. Chhoda provides a partial list of the GOP Senators who opposed further stimulus, and provides key information about the 35 Senate seats up for reelection in the 2020 elections.

Sen. Patrick J. Toomey (R-Pa.) is concerned that the “vast majority of direct payments went to people who did not have any lost income” and wants to limit the scope.

The $1 trillion price tag: “It’s a mistake,” Sen. Ted Cruz (R-Tex.) told reporters, in comments echoed by Sen. James Lankford (R-Okla.): “I think we should be focused on reopening the economy not simply shoveling trillions of dollars out of Washington. I think this bill is the wrong approach.”

“It’s a mess. I can’t figure out what this bill’s about,” Sen. Josh Hawley (R-Mo.) told reporters after a lunch with GOP lawmakers to discuss the HEALS Act. “This is not going to be the bill. They’re going to go negotiate with Pelosi. We have no idea what the final bill will be, and we’ll be the last to know.”

Sen. Ben Sasse, a Republican from Nebraska, declared “there are a hundred problems with the plan.” about the HEALS Act.

“The White House is trying to solve bad polling by agreeing to indefensibly bad debt,” Sen. Ben Sasse (R-NE) said in a statement. “This proposal is not targeted to fix precise problems — it’s about Democrats and Trumpers competing to outspend each other.”

“I don’t want to see any new authorization of money,” Sen. Ron Johnson, a Republican from Wisconsin, said.

GOP Sen. Mike Braun of Indiana: “In my opinion, we need to get back to the Trump economy not the federal government trying to replace it,” Braun said.

Republican Sen. Pat Toomey of Pennsylvania said he was studying the HEALS proposal, but has problems with a “number” of provisions. “I’ll wait and see what the final product looks like, but I’m pretty skeptical about the way it seems to be shaping up,” Toomey said.

“I think it would be fair to say at this juncture that we have unity in disagreement,” quipped Sen. John Kennedy (R., La.). “It’s a mess,” said Sen. Josh Hawley (R., Mo.), who added that he wasn’t inclined to vote for the GOP stimulus plan.

One of the most vocal critics of the proposal was Sen. Rand Paul (R., Ky.), who stormed out of the GOP lunch exclaiming that he must have been at the wrong meeting. “Trillions of dollars of debt! This is what Republicans stand for?” he said.

Thank you for making our channel the FASTEST GROWING channel on current affairs and personal finance!