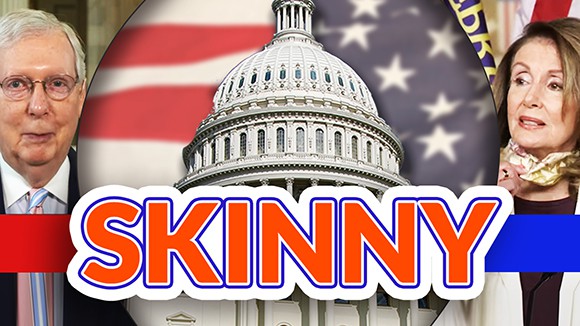 Dr. Chhoda analyzes a new report on the “New GOP ‘Skinny’ COVID Relief Bill, Which Doesn’t Include More Stimulus Checks, Cuts Extra Unemployment Pay In Half” and why it’s likely to be dead on arrival.

The proposal, dubbed the “skinny” plan, comes as Democrats, Republicans and the White House have reached an impasse in negotiations, while the Senate remains in recess.

Under the new GOP proposal, the previous $600 per week would be cut to just $300. The legislation, which Politico reported could be added to a continuing resolution to fund the government through September, does not include stimulus payments of up to $1,200. Under the Democratic proposal—the $3 trillion HEROES Act—and the previous Republican plan—the $1 trillion HEALS Act—checks or direct payments of up to $1,200 would have been sent out to most Americans.

Beyond the unemployment benefits, the bill would provide just over $100 billion in funds for education, a sticking point that some conservative GOP lawmakers have argued against. The legislation would also provide $10 billion in funding to bolster the U.S. Postal Service, as Democrats have accused the White House of attempting to undermine the federal agency ahead of the election.

Meanwhile, the Democrat-controlled House of Representatives is set to vote Saturday on USPS legislation that would give the agency $25 billion in additional funding.

Whether Democrats, and Republicans, will agree to the proposal, remains to be seen.

But the Republican-led Senate currently is set to remain on recess until after Labor Day on September 7, meaning any further relief from Congress likely won’t arrive until autumn.

Meanwhile, White House chief of staff Mark Meadows is planning to be on Capitol Hill for the House USPS vote Saturday, an attempt to talk to Democrats and Republicans about negotiations on pandemic relief. The White House has been pushing for a small-scale relief bill — one that includes enhanced unemployment, PPP money and stimulus checks. Democrats, however, have rejected that approach, and have suggested they’d talk to the White House about a deal somewhere in the $2 trillion neighborhood, which they consider halfway between their offer and the GOP offer.