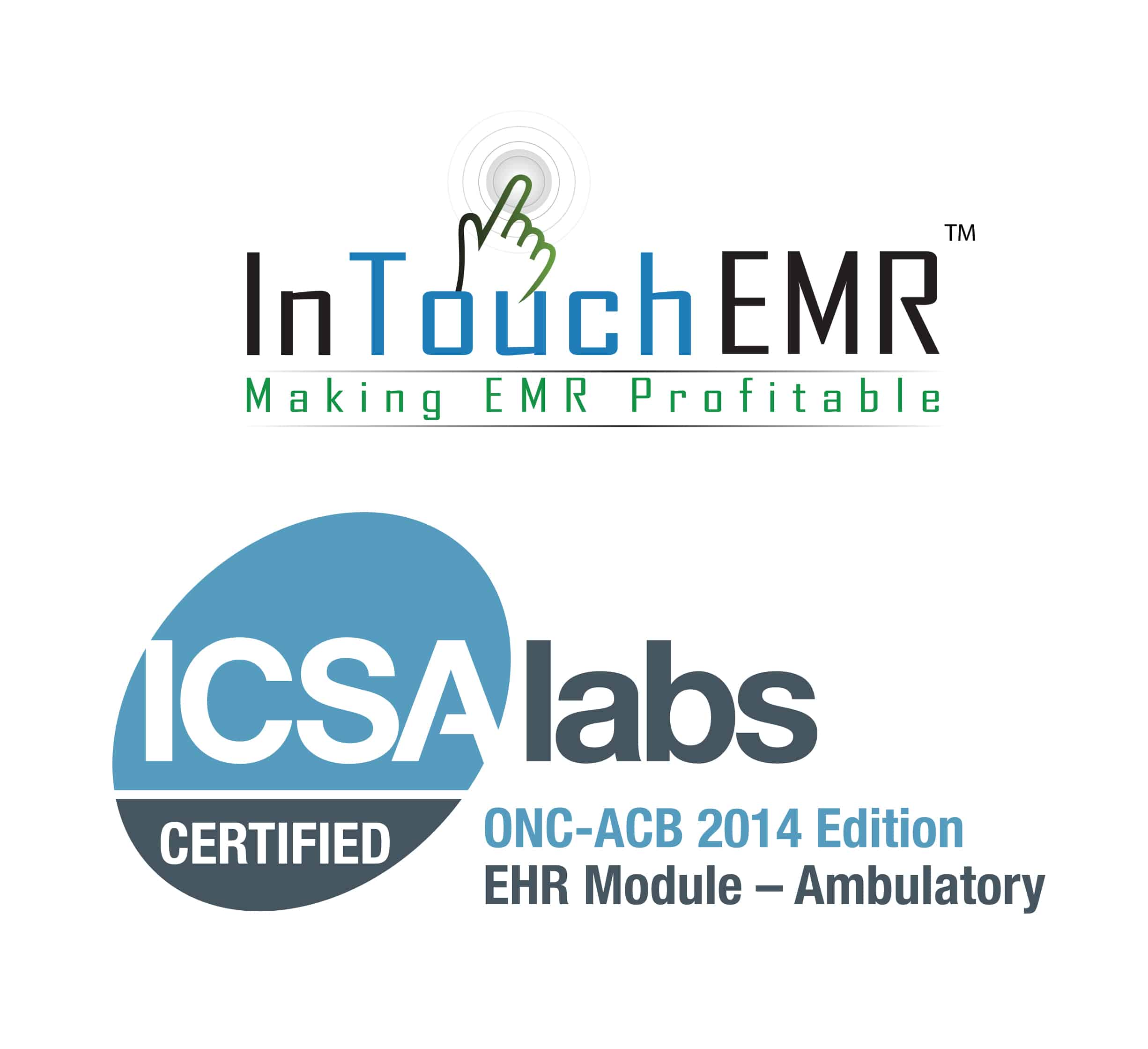 In Touch EMR Version 1.0 has achieved ONC HIT 2014 Edition Modular EHR certification on January 22, 2015, which designates that the software is capable of supporting Eligible Providers with meeting the Stage 1 and Stage 2 Meaningful Use measures required to qualify for funding under the American Recovery and Reinvestment Act (ARRA). In Touch EMR, Version 1.0 was certified on January 22, 2015 by ICSA Labs, an Office of the National Coordinator-Authorized Certification Body (ONC-ACB) and is compliant in accordance with applicable criteria adopted by the Secretary of Health and Human Services (HHS).

In Touch EMR, Version 1.0’s certification number is 150002R00 as seen on www.oncchpl.force.com/ehrcert/CHPLHome.

ONC HIT certification conferred by ICSA Labs does not represent an endorsement of the certified EHR technology by the U.S. Department of Health and Human Services.

“In Touch EMR is one of the only EMR vendors in the rehabilitation space to pass all of the ONC HIT 2014 Edition EHR Certification criteria required to satisfy the Base EHR definition,” said Nitin Chhoda PT, DPT, CEO In Touch EMR.

ICSA Labs, an independent division of Verizon, offers vendor-neutral testing and certification. 2014 Edition ONC HIT Certification is granted to those technologies that are capable of meeting the more rigorous testing criteria developed to support providers and hospitals who wish to demonstrate Stage 2 meaningful use, which focuses on the capability of health IT to deliver higher quality patient care and exchange clinical information securely.

The clinical quality measures to which In Touch EMR Version 1.0 has been certified include:

The additional software relied upon to comply with one or more of the certification criteria include: EMR Direct phiMail® Server v1.3 and HashCalc and Meinberg NTP. The additional types of costs that an eligible provider would pay to implement this EHR module’s capabilities in order to attempt to meet meaningful use objectives and measures include monthly service fees, interface development or configuration fees, integration fees for health information exchange, or third party database products to support patient education or other required patient services.

Please note that certain healthcare professionals such as physical therapists and occupational therapists are not considered ‘eligible professionals’ for Meaningful Use incentives. However, the ONC HIT 2014 Edition Modular EHR certification of In Touch EMR demonstrates the commitment of In Touch EMR towards security, interoperability and compliance, in accordance with applicable criteria adopted by the Secretary of Health and Human Services (HHS).

Definition of Base EHR

Enterprise-class architecture. In your hands.

We use Java, the global standard for developing and delivering embedded and mobile applications, web-based content, and enterprise software. Unlike outdated systems using PHP and server-based software, we decided to use Java to efficiently develop, deploy and use exciting applications and services in a cloud-based environment. We use a spring framework. Spring helps development teams everywhere build simple, portable, fast and flexible systems and applications.

We write clean, testable code you can use with confidence – Spring provides an open programming model that is comprehensive, cohesive, widely understood and well-supported. The Spring Framework provides a comprehensive programming and configuration model for modern Java-based enterprise applications – on any kind of deployment platform. A key element of Spring is infrastructural support at the application level: Spring focuses on the “plumbing” of enterprise applications so that teams can focus on application-level business logic, without unnecessary ties to specific deployment environments. Core support for dependency injection, transaction management, web applications, data access, messaging, testing and more are standard aspects of our application. For more information, please visit www.spring.io/

Based on its recent analysis of the healthcare cloud market, Frost & Sullivan has recognized ClearDATA with the 2014 North American Healthcare Cloud Leadership Award, as a testimony to its utmost standards in compliance, security and performance and deep understanding of the complex healthcare and technological landscape.

Military grade data protection. Peace of mind for you.

We help protect your data and grow your practice with the most trusted and secure choice for website protection. The In Touch EMR website security solution features the EV SGC certificate from Comodo and the green address bar, the most recognized trust mark on the Internet. EV SGC expands SSL technology to a wider range of customers, since it enables older, weaker 40 or 50 bit encryption to step up to secure 125/256 bit encryption. The dynamic, ‘point-to-verify’ feature delivers real-time verification of business identity. 2048 bit private keys are used throughout certificate, further improving security of data.

The green browser address bar provides conspicuous visual verification of the confirmed identity of In Touch EMR. Users enjoy the strongest possible level of SSL encryption with vulnerability assessment and round-the-clock malware scanning to help defend against attacks. Your data is in safe hands at In Touch EMR. Enjoy military grade encryption with 128-bit minimum to 256-bit with extended validation and full organization authentication. The extended Validation is only given to online businesses that can be verified through secure authentication processes that meet the extended validation guidelines established by the CA/Browser Forum.

https://treatacneforever.net
https://antianxiety24x7.com
Click here to learn more about the Comodo SSL architecture and the next level in visual authentication