The TRUTH About How the US Government Creates Stimulus Checks | Is It Your Taxes? | Hyperinflation 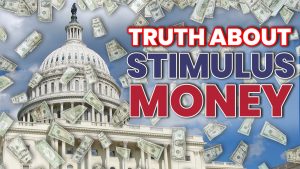 Stimulus Check Updates Playlist – Everything You Need to Know

In this training video, Dr. Nitin Chhoda addresses the question – How Does the US Government Create Stimulus Checks? What is the “Open Secret Source of Unlimited Stimulus Money”? Is it really an “The Infinite Stimulus Money Loop”?

1. The Biggest Myth about Stimulus Checks

2. Where the Stimulus Money is Coming From (The Infinite Money Loop)

THE BIGGEST MYTH ABOUT STIMULUS CHECKS

Where is all this stimulus money coming from? Is it coming from the taxes we pay?

Is it coming from the printing of physical currency?

It’s neither. Congress must authorize taxes to be allocated for spending, and that has not happened for stimulus money. Instead, this money is being borrowed.

The US Government expects to borrow $4.5 trillion dollars in fiscal year 2020 that ends in September

Compare this number with $1.8 trillion that was borrowed in FY 2019

The Treasury department is the agency of the US Government that does all the borrowing.

They sell treasury bills (these are like IOUs) to 3 types of entities – private sector (other companies and individuals), public sector (other parts of the government) and foreign entities

The Government pays back the money it borrows with future revenue, and some interest.

The government is using this money to support private individuals and companies, or state and local governments during this pandemic. The Treasury is borrowing money by selling treasury bills and spending that money to revive the economy.

The goal is not unlimited borrowing because that could indeed make the government bankrupt. The goal is to borrow enough to weather this crisis, and let the economy get back into a rhythm that it was in before this crisis hit.

This money is being used by the Treasury to stimulate the economy and other programs.

Critics say if the Fed prints money to finance the borrowing (spending), that will lead to economic turmoil and inflation like Venezuela and the trillion dollar notes seen in Zimbabwe

If there is unlimited printing and unlimited spending that far exceeds the goods and services available in our economy, then in that case, it’s a risk. At this point, there are no economic indicators that suggest hyperinflation is a possibility.