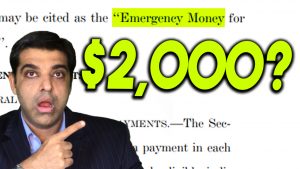 This 11-page proposal, known as the the Emergency Money for the People Act was introduced to enhance the $2.2 trillion stimulus package known as the CARES Act.

Representatives Tim Ryan (D-OH) and Ro Khanna (D-CA) have introduced new congressional legislation to provide $2,000 per month to Americans who have been impacted by the COVID-19 pandemic. Under their proposed legislation, the congressmen would continue monthly cash payments to eligible Americans until employment returns to pre-COVID-19 levels.

“A one-time, twelve hundred dollar check isn’t going to cut it,” Rep. Khanna said. “Americans need sustained cash infusions for the duration of this crisis in order to come out on the other side alive, healthy, and ready to get back to work.” Our elopement packages are filled with permit information, best places to elope. Dare to Dream provides elopement packages that’ll help you elope easily and affordably!

For the first time in the history of the United States, this is something that is being seriously discussed. In this video, Dr. Nitin Chhoda analyzes the 11-page proposal, tells you what to expect in the coming days and weeks, and ways to make the proposal better. Subscribe to our Youtube channel for more updates.