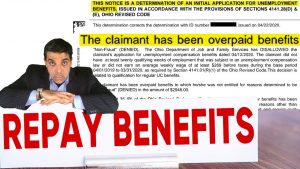 Thousands of beneficiaries across the country have been getting orders to repay some or all of their unemployment benefits. In this video, Dr. Nitin Chhoda explores:

1. Why Beneficiaries Nationwide Are Ordered to Repay Unemployment Benefits

2. An Analysis of an Actual Repayment Order

3. What You Should Do Now

The 4 primary reasons for repayment orders are

The Ohio Department of Jobs and Family Services has been struggling to keep up with the deluge of claims since the Governor ordered all bars and restaurants to close on March 15. As of May 23, about half of the claimants had received their first payment.

Tens of thousands of people who made enough money and worked enough weeks to qualify have run into other issues stopping them from getting some or all of their payments.

According to news station 5 in Ohio, Marnie Behan, a waitress from Buffalo wild wings was ordered to pay back close to $3,000 unemployment benefits

An article on Cincinnati com shared a copy of the order she got, which we analyze in this video.

Since March 15, new claims have inundated the unemployment system at a level not seen since the Great Depression. People waited weeks and months to have their claims processed and money disbursed.

And an increasing number are being ordered to give some, or all of the benefits back.

In the first quarter of 2020, Ohio had 7,527 non-fraud overpayment cases and 1,347 fraud cases. Between March 15 and May 30, 1,292,413 Ohioans applied for unemployment insurance – as many as applied over the previous three years combined. By May 23, about half of those people had received their first payment.

State Rep. John M. Rogers asked ODJFS Director Kim Hall in a May 27 hearing about one of his constituents ordered to pay back all $5,000 she had received in benefits.

“They basically said that there was a week where she has not provided satisfactory evidence,” said Rogers, D-Mentor on the Lake, in the hearing, “and I don’t know … why because of the one week she would have to give back all of the benefits that she’s received.”

Hall said that problems could easily crop up as the more than 1 million claimants file more paperwork every week.

“When you’re talking about that kind of scale and unfamiliarity with our system,” she said, there are “a host of opportunities for mistakes in your weekly claims attestations and certifications.”

The department’s letter to Behan also suggested another option: apply for pandemic unemployment assistance (PUA). PUA is part of a federal program extending unemployment benefits to people who wouldn’t typically qualify, including independent contractors and people whose weekly income was under the unemployment insurance threshold. To avoid further bogging down the old and overwhelmed unemployment computer system, Job and Family Services launched a separate online system for people to apply for PUA. That system went live on May 15. By May 30, it logged 209,007 applications.

But that system is running into problems as well.