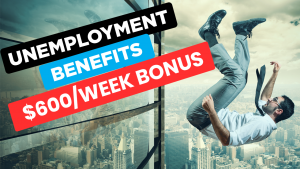 There are certain things you MUST KNOW about the historic expansion of state unemployment benefits during the current crisis.

– The $600 Unemployment Booster Shot, State by State (New York Times) An additional $600 a week set aside in the federal stimulus package for the unemployed until the end of July

– How the $600 amount was selected: Adding $600 to the national average unemployment payment – $371.88 a week at the end of 2019 – allows the ‘replacement rate’ to go from 38 percent to almost exactly 100 percent. In other words, it is intended to replace what the average American worker would have earned under normal circumstances.

– The uneven nature of the benefit with this extra $600/week for the unemployed A person who earns close to the average weekly wage will roughly get their salary replaced on unemployment, but low-wage workers who lose their jobs are more likely to end up making greater amounts than they were before. The effect is uneven across states. In some states, residents do much better than others.The cost of living will determine how far an extra $600 a week will stretch.

– How long unemployment benefits last, and what the future holds Under normal circumstances, the length of time workers can receive unemployment varies by state. While the majority offer 26 weeks of benefits, coverage ranges from a low of 12 weeks in North Carolina to a high of 28 weeks offered in Montana.

Under these circumstances, the federal government has stepped in and established the Pandemic Emergency Unemployment Compensation (PEUC) program,. Under PEUC, workers can qualify for an additional 13 weeks of benefits on top of their state coverage. Given the possibility to receive unemployment aid for nearly 10 months (39 weeks), along with the weekly $600 federal boost through the end of July, some workers will receive more money by way of benefits than ‘traditional payroll’.

8 Ways to STOP Scammers from Stealing your Stimulus Check

Data Breach at the SBA (2 Things to Do Right Now)

The Pros and Cons of the $2000 Per Month Stimulus Proposal

$1000 Stimulus Checks in NEW Stimulus Bill (EIDL Grant) Approved: How to Get Yours