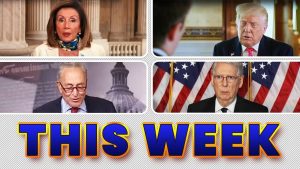 Dr. Chhoda analyzes the latest reporting from the Wall Street Journal and the Washington Post and a revealing timeline from Michele Evermore about WHEN you can expect enhanced unemployment benefits to arrive in your account.

Rule of thumb as per Michele Evermore (@EvermoreMichele on Twitter) is it will be about 2 weeks from passage of new law for most states to adopt and implement new enhanced unemployment benefit extensions so if Congress passes something next week (likely best case scenario), the monty may not arrive until August 28 – which is one full month after expiration on July 31.

The White House and Democratic leaders agreed to try to finalize a deal to address lapsed unemployment benefits and eviction restrictions by the end of this week and hold a vote in Congress next week, suddenly trying to rush stalled talks in the face of growing public and political unrest.

Senior White House officials said on Tuesday that they made “very concrete offers” to Democrats related to unemployment benefits and eviction protections, and after days of bickering both sides now appear to be trying to secure a compromise.

“I may not have to sign [executive orders]. Progress is being made,” President Trump told reporters at the White House.

Pelosi and Schumer also pointed to signs of progress in earlier comments to reporters.

“We agree that we want to have an agreement,” Pelosi said, adding: “This takes time, and it takes specificity.”

White House negotiators said they aim to reach a deal with Democrats on a new coronavirus-relief package by the end of the week, with both sides saying they made progress in talks to bridge differences in unemployment payments and other aid proposals.

“We’re going to try to reach an overall agreement, if we can get one, by the end of this week, so that the legislation could be then passed next week,” Treasury Secretary Steven Mnuchin told reporters Tuesday after meeting with House Speaker Nancy Pelosi (D., Calif.) and Senate Minority Leader Chuck Schumer (D., N.Y.) “Some issues we’ve been able to agree on. Some significant issues are still up.”

Democrats characterized their afternoon meeting with White House officials as a slow but productive grind, and both sides said they expected to be back at the bargaining table on Wednesday.