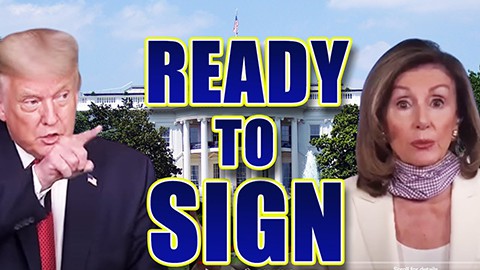 BREAKING NEWS – This is an encouraging sign, because I’ve been saying for weeks now, that someone had to budge. This is the first time this information has been made public – the $1.3 trillion offer from the White House. It indicates the White House wants to increase public pressure on House Speaker Pelosi about a second stimulus package. We can expect a response from Speaker Pelosi shortly.

“The president right now is willing to sign something at $1.3 trillion,” Meadows told reporters at the White House, saying that the figure had been offered privately to Democrats. He had previously said the White House was willing to go “north” of $1 trillion but did not offer a precise figure.

He said, however, that Speaker Nancy Pelosi (D-Calif.) has stood firm in her demand for a $2.2 trillion relief package.

Meadows and Pelosi spoke Thursday afternoon, resuming negotiations on the next coronavirus package that have been stalled for three weeks. Pelosi said Thursday that she offered Meadows a concession by proposing a $2.2 trillion bill, down from a $2.4 trillion offer earlier this month.

“We have said again and again that we’re willing to come down and meet them in the middle — that would be $2.2 trillion — and when they’re ready to do that, we’ll be ready to discuss and negotiate the particulars,” Pelosi told reporters in the Capitol following the phone call with Meadows yesterday.

Speaker Pelosi said, among other things, the Republicans “are rejecting the funding needed for testing and tracing to crush the virus and safely reopen schools and the economy.”

She said she hoped the Republicans would accept the Democratic offer and resume negotiations.