WHITE HOUSE: SENATE WILL RETURN TO PASS / PUT FORTH A STIMULUS BILL NEXT WEEK 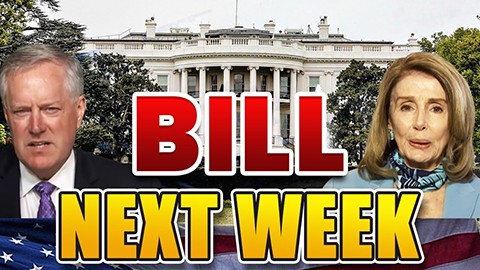 (Working backwards from a number) is not a workable approach because that’s not the way that you actually arrive at any kind of a number. Generally, what you do is you say you have a certain amount allocated for this program, another amount for another program. And as you do that, you build it from the ground up. That’s what we’ve been trying to do, base it on facts, base it on actually the cost associated with each program. I think that’s been the frustration. I will say this as we’ve had discussions with Democrats on Capitol Hill, as we’ve continued our discussions with Republican senators, we’re making real progress. And I will say that as we look at the number of things that we actually agree to and in the amounts of money allocated to those areas, probably the biggest stumbling block that remains is the amount of money that would go to state and local help. The speaker is still at $915 billion, which is just not a number that’s based on reality and certainly not a number that represents the lost revenues for state and local governments.

We’re making real progress with some of the Democrats on Capitol Hill. They’ve had some very thoughtful recommendations that we’ve actually been able to have real discussions behind closed door.

The Senate Republicans will be returning. They’ve been working around the clock each and every day. We have a call to talk about where we can find consensus there. I expect them to pass a bill or at least put forth a bill in hopes of of getting to that 60 vote threshold sometime next week.

White House Chief of Staff Mark Meadows joins “Squawk on the Street” to discuss the state of the stimulus talks between the White House and Democrats.