WHITE HOUSE: SPEAKER PELOSI DOES NOT WANT TO DO A DEAL BECAUSE IT WILL BE GOOD FOR THE PRESIDENT 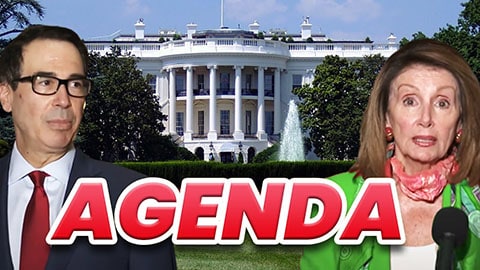 Dr. Chhoda analyzes some recent comments from the US Treasury Secretary Steven Mnuchin about the current state of the stimulus negotiations and his belief that a political agenda by the Democrats to prevent the President’s reelection is stalling stimulus talks.

CONCERNED THAT SPEAKER PELOSI THINKS ANY DEAL WILL BE GOOD FOR THE PRESIDENT, POLITICS GETTING IN THE WAY, AVOIDING GOVERNMENT SHUTDOWN IS PRIORITY

– I think there is a compromise if the speaker is willing to move forward.
– I am somewhat concerned that she’s afraid that any deal will be good for the president. And obviously, we have politics that are getting in the way.
– The speaker and I will be working on the C.R. this week, which is obviously a priority for us to make sure that we don’t shut down the government.

AN ECONOMIC SCENARIO THAT NOBODY HAS EVER SEEN, ENORMOUS REBOUND, VERY STRONG THIRD QUARTER

– This is an economic scenario that nobody has ever seen, because this is a scenario where we closed down the entire US economy
– As we’ve reopened the economy, you’ve seen an enormous rebound.
– We’re down to 8.4% unemployment, people thought we were going to have as high as 25% unemployment. So clearly we are having a great rebound. We’re going to have a very strong third quarter.
– There are also areas of the economy, particularly the travel area, entertainment, hotels, small businesses, restaurants that are going to need more work.

NOW IS NOT THE TIME TO WORRY ABOUT REDUCING THE FEDERAL DEFICIT, CARES ACT AND 13(3) FACILITIES SAVED THE ECONOMY

– Now is not the time to worry about shrinking the deficit or shrinking the Fed balance sheet.
– There was a time where the Fed was shrinking the balance sheet and coming back to normal. The good news is that gave them a lot of room to increase the balance sheet, which they did.
– Both the monetary policy working with fiscal policy and what we were able to get done in an unprecedented way with Congress is the reason why the economy is doing better.
– Had we not passed the three trillion dollar deal and had the Fed not acted in the way they’ve done, including the various different 13-3 facilities we’ve worked on together, you’d see a very, very different economic scenario right now.

0:00 US Treasury Secretary Steven Mnuchin “Speaker Pelosi does not want to do a deal because it will be good for the President”
3:04 Concerned that Speaker Pelosi is afraid to make a deal
4:13 Where the economy stands right now?
7:34 Reducing the federal deficit, cares act and 13(3) facilities saved the economy
12:24 The list of lending facilities