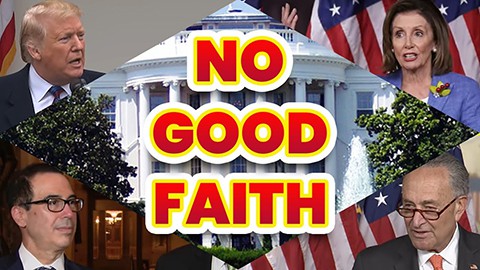 Unfortunately, the speaker and Senator Schumer just don’t want to negotiate in good faith. They’ve refused to meet. We reached an agreement on many, many issues, but they said unless we come out with a top line, they won’t even give us details as to what they’re interested. So, again, I think it’s bad faith. And unfortunately, the President wants us to help with more money for kids and jobs and we can put over another trillion dollars into the economy quickly. As I’ve said before, if that’s not enough and the speaker thinks we need to do more, we can always come back and do more. But we are having a great economic comeback as we’ve reopened the economy. We’re getting more jobs back, but there’s still a lot of work done. The President is not done with his work until we get everybody back to work.

We’re going to keep trying because it’s too important for the American people. Mark Meadows and I have been hosting daily calls with Mitch McConnell and the Republicans in the Senate, and we’ve been keeping Kevin McCarthy and his team up to date. And hopefully Mitch will enter new legislation next week that again, kids, jobs, liability protection for small businesses. As you know, there’s still too many small businesses that have been hurt by this, have nothing to do with their own issue. Parts of the economy have opened very quickly. Parts of the economy are still suffering.

I think that Chairman Powell and the entire Fed has done an extraordinary job in this crisis, the pandemic issues and really working with Treasury, we stood up an enormous amount of emergency facilities that that’s part of the reason why we have the economy reopening the way we do. I think the Fed’s issue is they’ve been trying to get inflation up for a long period of time. There hasn’t been much inflation. I think what they’re saying makes common sense, that if you want to average 2% inflation, there’ll be times when you run higher, in times, you run lower.