WHITE HOUSE: THIS IS NOT LIFE THREATENING FOR MOST PEOPLE (DO YOU AGREE) 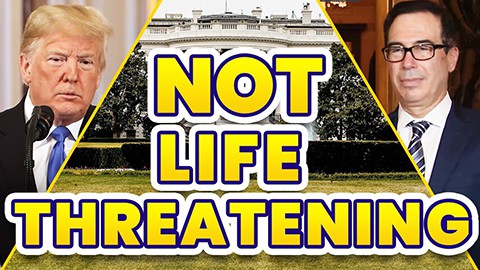 Dr. Chhoda analyzes some additional comments from one of the key White House negotiators in the stimulus discussions, US Treasury Secretary Steven Mnuchin, and invites the Ignition time community to answer the question – do you agree?

THIS IS NOT A LIFE THREATENING SITUATION FOR MOST PEOPLE

As we’ve been saying all along, for most people, this is not a life threatening situation. It’s really just a life threatening situation for people who are at high risk with other issues. But we’ve made enormous progress. And I think you’re going to see enormous progress on vaccines quickly between now and the end of the year. Last week, the President made a major announcement with 150 million new point of care tests so they can be distributed to every school in the country so schools can get opened safely. So this is really about making sure our kids can be at school and our small businesses can get back to work.

FOCUS IS TO GET THE ECONOMY BACK TO WHERE IT WAS

The President’s never frustrated, he’s always demanding better information, more information, pushing all of us to make sure we’re working around the clock. The President is absolutely focused, as I’ve said, to kill this virus and get the economy back to where it was the greatest economy we had going on before this.