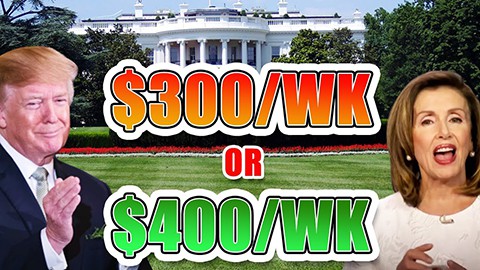 Dr. Chhoda answers the question “Will you get an extra $300 or $400 unemployment benefit?”

The answer – It depends on your state.

Most of the 19 states that applied for the assistance as of Thursday are paying a lower amount.

Three states, Kentucky, Montana and West Virginia, are opting for the full $400.

The difference is due to federal rules around cost-sharing.

Arizona started paying benefits out on Monday, the first state to do so.

Eight others had applied as of Thursday and are awaiting final approval — Alabama, Alaska, Arkansas, California, Indiana, Michigan, Texas and West Virginia, according to FEMA.

States are only guaranteed three weeks of funding for the program. Additional funding will evaluated on a week-by-week basis.

States can count the benefits they’re already paying as fulfillment of that — meaning they don’t have to kick in any additional money.

That’s the route most are taking.

“The majority of the states so far have indicated they’ll take the $300 federal payment with the match being provided by their existing [unemployment] payments,” Keith Turi, FEMA’s assistant administrator of recovery, said Thursday.

Kentucky, Montana and West Virginia officials indicated they’ll use federal funding allocated to states through the CARES Act, a pandemic relief law enacted in March, to pay for their $100 weekly portion.