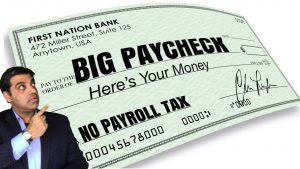 1. What is payroll tax

3. What this means to you

A payroll tax is a tax withheld from an employee’s salary by an employer who remits it to the government on their behalf. The tax is based on wages, salaries, and tips paid to employees. Payroll taxes are deducted directly from the employee’s earnings and paid directly to the Internal Revenue Service (IRS) by the employer. Payroll taxes include Social Security, which takes out 6.2% of your income up to $132,900 and Medicare, which takes out 1.45% of your income. Married couples filing jointly who make $250,000 or more, and people who make over $200,000, pay an additional 0.9%.

Employers also pay payroll taxes. They pay 6.2% of your income, so the government gets 12.4% of your total income, and they pay 1.45% of your income toward Medicare as well.

In this training video, Dr. Nitin Chhoda outlines the ‘payroll tax cut proposal’ emerging from the White House, and what this means to you. The Trump administration has pushed for payroll tax cuts as part of an economic relief package in response to the pandemic.

Payroll tax cuts could put more money in the pockets of people with higher salaries who are still getting paid through the crisis. However, tax cuts would do nothing for people who lost their jobs because of the pandemic and no longer have a paycheck with taxes to cut.

A payroll tax cut could free up more cash for employees and employers. If Social Security and Medicare taxes aren’t taken out of paychecks, workers and businesses would take home a little more money with each paycheck.

A payroll tax cut, if enacted for both employees and employers, could give workers more money to spend and businesses more cash as they face a decline in consumer spending through the crisis.

The tax cut would disproportionately give more money to people with higher incomes, who may have more savings to fall back on during this crisis.

A payroll tax cut would also do nothing to help those who lost their jobs because of the crisis, especially lower-income people in industries like tourism, hospitality, and dining that have been especially hit hard by the pandemic and decline in demand from consumers.